Quantum Natural Language Processing (QNLP) is an emerging field which is at an intersection of Categorical Quantum Mechanics (CQM) and Computational Linguistics. This is one of those unique field which combines Quantum Computing with Natural Language Processing to take advantage of the properties which Quantum Computing paradigm provides. QNLP is quantum-native which means that the language structure wants to run itself on a quantum computer rather than a classical computer because a natural model of language is equivalent to a natural model utilized to describe quantum mechanical phenomena!

The only prominent company which is working in the field of QNLP is Quantinuum (formerly Cambridge Quantum) and has achieved major milestones in the field of QNLP. They were the first to display the true potential of running language on real quantum hardware such as the IBM quantum hardware. They have released the world’s first high-level Python based QNLP toolkit called lambeq which is able to convert any diagram (representing the language structure) into a quantum circuit that helps to run the language on a quantum hardware and simulator.

This is a short course on Quantum Natural Language Processing giving the primary foundations which will help to get started with QNLP and explore its practical applications using the lambeq QNLP toolkit. The course does not provides the mathematical foundations i.e. category theory but rather touches on the diagrammatic quantum theory which is used entirely to build an algorithm (again pictorial) called DisCoCat (Distributional Compositional Categorical).

The course has been divided into the following parts which has a coherent structure to help you navigate according to your requirements:

I am very confident that the field of QNLP is developing rapidly and it will take advantage of the quantum computers which we have today just like other applications of quantum computing are taking advantage. The pictorial nature of QNLP concepts is going to attract many to do more research on this unique and amazing field! 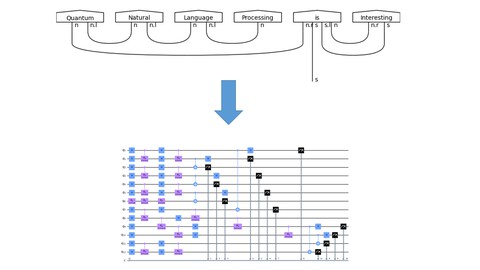